Home
>
Home
>
All Products
>
Booky Wook 2: This Time It's Personal 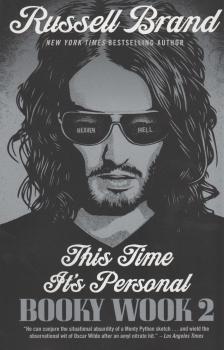 Booky Wook 2: This Time It's Personal

A Memoir of Sex, Drugs, and Stand-Up

$14.99 in stockNew
H1 978-0-06-195808-3
Picking up where he left off in My Booky Wook, movie star and comedian Russell Brand details his rapid climb to fame and fortune in a shockingly candid, resolutely funny, and unbelievably electrifying tell-all: Booky Wook 2. Brand's performances in Arthur, Get Him to the Greek, and Forgetting Sarah Marshall have earned him a place in fans' hearts; now, with a drop of Chelsea Handler's Chelsea Chelsea Bang Bang, a dash of Tommy Lee's Dirt, and a spoonful of Nikki Sixx's The Heroin Diaries, Brand goes all the way - exposing the mad genius behind the audacious comic we all know (or think we know) and love (or at least, lust).
As incredible as it may seem, the honesty, the mayhem, the lascivious scandal of Russell Brand's magnum opus, My Booky Wook, are surpassed by Booky Wook 2! This time it's personal, as Russel Brand's book unabashedly charts his rise from crack-house junkie to Hollywood star while indulging in sexual excesses that make Caligula seem like a prudish spinster - encountering thousands of women, often three or four at a time (for efficiency), on his quest to find true love. Here is the riveting story of what happens when insatiable desire meets limitless opportunity and a punk from the wrong side of the tracks is given the keys to the palace. Indeed, Brand's riot of self-indulgence would be rampaging still were it not for a well-aimed bottle tossed to the head, delivered from the hand of the exquisite Katy Perry, one of the world's biggest pop stars. Can true love conquer all? Is it a force more powerful than the raging libido of an insatiable professional madman? The answer lies within . . . Booky Wook 2!